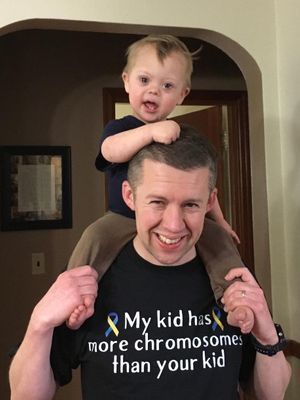 It was 2:30 a.m. I woke with a start in the hospital room. The day before had been a long day.  My wife had gone into labor early that morning, 5 weeks early. We raced to the hospital.  Medical staff explained the risks of being born so early. He might be fully developed; or not.  There was a good chance his lungs would not be ready. We then waited all day and late into the night as labor progressed at a snail’s pace. Then I fell asleep, only to be awakened with a flurry of activity in the room; something was wrong.

The next 60 minutes were a blur.  My wife delivered our beautiful son (Gavin). Then the challenges really began. He was not breathing well, and the staff were concerned; they rushed him to the nursery for special care. No cuddle time with mom; no happy pictures. As my wife recovered in the delivery room, I (groggy and half-asleep) followed Gavin.

Then the news—as I watched the staff fit oxygen tubes to his tiny face—the on-call pediatrician approached me and said something like, “Jared, I’ve noticed some signs of chromosomal abnormalities.” I, with 7 healthy kids at home, and still in a 3 am fog, had no idea what she was talking about. She then pointed out some unique features—the wide gap between his big toe and his other toes, one crease in his hands (instead of two), etc.—and told me these were signs that he had down syndrome.

Do you know those movies where time stands still for the main character? Well, life stood still for me.  For how long, I don’t know. I just know I melted into the background and didn’t know what to do. My son had a disability. We’d never experienced that before. We didn’t know it was coming and frankly I didn’t fully know what that meant for him or for our family. Hundreds of thoughts raced through my mind.

They say hindsight has “20/20 vision.” Looking back now, I realize that my initial thoughts of the future were blurred by my perception of what I thought life wouldn’t be like and what I thought I might be giving up (e.g., the trips we may not take, the retirement we may not enjoy, the joy of seeing all the kids leave the house someday, etc.) to care long-term for a child with disabilities. These things worried me.

But as Gavin has grown and overcome problem after problem he has “opened my eyes” to the joys of having a child with down syndrome. He gives the best “Gavin hugs” to friend and stranger alike. Many strangers (whether it be at a supermarket or at a basketball game) light up when they see him. He has something extraordinary about him that many can sense—he simply radiates love, peace, joy, and light from within. When he hugs you, really hugs you, he somehow conveys those feelings to you. When you’re having a bad day, he somehow soaks up your bad feelings and takes them away.

About a year ago, we almost lost Gavin. He choked on a piece of fruit in our kitchen, fell unconscious, and began to turn blue. Through the heroic efforts of my oldest son, we resuscitated him back to life and before we knew it, Gavin was hugging a first responder and waiving at the ambulance driver on the way to the hospital. In that moment, my vision was quite clear—I would gladly give up all those things I once worried about in exchange for my son with disabilities that has taught me so much.

Some parents struggle for years with accepting and embracing a child’s disability. Thankfully it took my wife and I much less time. While I can’t say we don’t have worries and concerns, I will say we have felt the calm assurance, through prayer and our understanding of the purpose of life, that Gavin has a special purpose on earth. I am a grateful that Gavin, and the abilities he exhibits through his down syndrome, has helped me see more clearly.