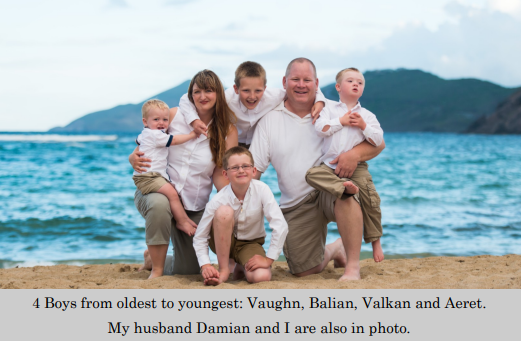 This morning like many others, I awoke at 5:25 AM to milk the family cow and heard the unearthly music of a Ben Ten Watch somewhere in my house. It is constantly going off, somewhere. I only hear it when everyone else is asleep, call it a blessing, that my house is usually so loud. I have lost this item, like many things recently: the DVD Player remote, my middle son’s IPad charging cord, and lots of socks. I’m pretty sure my son Valkan might have hidden these items, but I can not prove it and he will not tell me where they are. My youngest son is also only speaking in gibberish, so he might also be an accomplice. I’ve looked everywhere, but the sound seems to be reverberating from the house itself.

When I was pregnant with Valkan, I prayed and prayed for patience with my two boys who were 6 and 4 at the time. They were sometimes difficult, and I think a little jealous of not being able to do the things I used to do with them. Valkan was born prematurely at 37 weeks by C-section after the Doctor told us something was wrong. We had no idea he had Down syndrome until after he was born and he was immediately whisked off to the NICU after being resuscitated. As soon as he heard my voice in the NICU, he lit up like a Christmas tree. He knew me, without question, and was so happy I was there. We needed to stay 3 weeks at the hospital for Valkan while he was in the NICU. I remember playing a lot of Uno and praying Valkan could eat with a bottle and heal.

Things take longer to accomplish for Valkan. We appreciated every milestone a little more with him as it was such a challenge and took so much patience, work and consistent effort for him to achieve. Valkan never gave up and neither have we. This leads me to our latest challenge, Potty Training. This has been the bane of his existence. The ever present POTTY. We have a potty training Elmo chart, how-to videos, treasure chest of rewards, stickers, books, potty training timing watch, and endless advice. I thought we were ready. We tried several times before, but Summer 2016 was going to be it. Valkan was 6 and all the signs pointed to GO. He is barely verbal, so we had to take our cues from him. We started on summer break and every 30-45 minutes, Valkan was taken to the restroom. He tried so hard, too hard. No luck, but he would have an accident right after. He was getting very frustrated and after 4 days, he had had enough. He met me in the kitchen, shook my hand, kissed and hugged me, got his backpack and the keys to the car and headed for the door. Valkan politely sat on his seat, patiently waiting for me to take him to his new home, where there was no Potty. He wanted me to know that he appreciated everything I had done for him so far, but he had enough. He has always said so much without saying a word. I laughed; I guess there was going to be no more potty training for awhile.

Valkan is my patience as well as my inspiration. He goes at his own pace. I had to learn to adjust to that speed. I always wonder if I would be as patient as he is at achieving my goals, tirelessly trying again and again; to crawl, to walk, to talk, to read, to write, to achieve almost everything. He has made new friends in Kindergarten this year, without saying a word. That is a massive accomplishment that few would be able to achieve. People are learning sign language in our town, just so they can speak to him, including a student in his class and their parent. We were able to arrange a monthly sign language class, free of charge, to everyone interested. Last month we had 20 people attend. Wonderful.

One thing he needed no help at mastering, the ability to comfort others and know when they needed comfort. He does that better than anyone else I know. My middle son, Balian, has possibly saved my sanity. He has found the Ben Ten Watch and all the items previously mentioned above while I was writing this article. They were behind the couch, shoved way down in the floor air vent. Guess I should have looked there. We now can switch the TV movie and watch something besides Alvin and the Chipmunks. The remote has been missing for 3 weeks. I have permanently disconnected the watch, Ben is not transforming anytime soon.

I walked into school one day several years ago to pick up my son, right when the teacher was making fun of Valkan’s lack of having matching gloves. I pick my battles. Some days it is an accomplishment just to get everyone to school with their clothes on. I wish I was just referring to my son with special needs. You understand. The teacher did not. Valkan has thrown out shoes, socks, IPads, gloves, etc. sometimes from moving vehicles and usually in public places like Walmart or amusement parks. Sometimes he undresses just getting to the car for school. Maybe we need a nudist colony school. There would be no need for matching gloves. I wonder if there will be a voucher for that soon. I am constantly inspired and grateful for all 4 of my sons. Valkan has taught me more about what it means to appreciate life and all your accomplishments than anyone else could. I couldn’t ask for more.