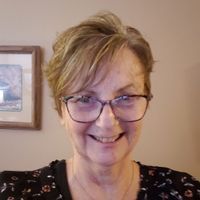 Cheryl Sutlick, a teacher at DeSales Catholic School for the last 37 years, teaches both middle and high school classes in World Geography, English, U.S. History and Journalism.  She graduated from Avila College with a B.A. in Theatre/Speech/Education and holds a Masters in Curriculum and Instruction from Eastern Washington University.  She also attained a degree in History from Central Missouri University.  Along with teaching, Cheryl spends a lot of her time at The Little Theatre of Walla Walla where she serves as secretary of the Board of Directors and directs numerous plays there. Her involvement at LTWW spans over thirty-five years.

Cheryl’s interest in the WWVDN comes from two of her three sons, Andy and John.  Andy, adopted from Russia when he was four, is now twenty-nine.  Andy is fetal alcohol and autistic.  He is a wonderful young man who has enriched his parents' lives incredibly.  Another son, John, had cerebral palsy from birth.  Though he could not communicate verbally nor walk, John was a special young man who touched many who knew him.  John passed away at the age of thirteen.  She has always found the WWVDN to be so helpful and accommodating to those families in need here in the valley.

Cheryl is married to Al, a former wildlife biologist for the Corps of Engineers now retired.  They have another son, Tony, who lives in Couer d’Alene and is soon to be married.  She is quite excited to be part of the Walla Walla Valley Disability Network and hopes that she can make some positive contributions in the future.